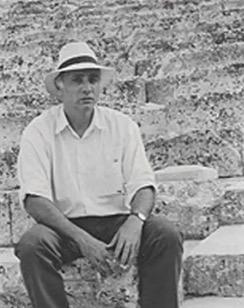 Kyriacos Efthymiou was born in 1954 in Nicosia, Cyprus, where he lives. He started his career as an actor at the Theater Organization of Cyprus (THOK). In 1993 he published his first poetry collection Επιάστηκεν το φεγγάριν (The Moon has been Caught) and in 2015 his collection Κυρτός αλατοπώλης (Bent Salt Seller) won the State Poetry Prize of the Republic of Cyprus). As an actor he is known for 1922 (1978), Evagora’s Vow (2001) and The Rape of Aphrodite (1985). His poetry collection Κυρτός αλατοπώλης (Bent Salt Seller). The Red Horse is his first book of prose.

He has also written three plays and the script of a film and has edited five digital audio discs (CDs) in which he reads poems by Cavafy, Pantelis Michanikos, Theodosis Nikolaou, Kyriakos Charalambidis and Costas Montis.

As a Citizen TALES Commons member, besides being actively involved in the collective, Kyriacos Efthymiou is preparing for his US tour in the fall of 2022 during which he will present his work in Boston and other cities. He will conduct creative writing workshops and will interact with various communities of the Greek-Cypriot Diaspora in the USA.