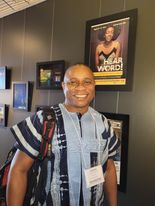 University of Lagos, Lagos, Nigeria. He specializes in Dramaturgy, Playwriting, Traditional and Contemporary African Drama. He has written, published and directed several plays, and some of his stage plays are adapted to films/home movies by Nollywood, the Nigerian film industry.

He has presented academic papers at several conferences. His research interest focuses on comparative and creative dramaturgy of violence in stage plays, movies, cartoons and videogames. Rasheed is a doctoral student at the Department of Comparative Humanities, University of Louisville, Louisville, Kentucky, US. As a member of Citizen TALES Commons, Rasheed is currently working on a play that addresses issues on dramaturgy of violence in the hope to see how drama can intervene in the fight against violence.