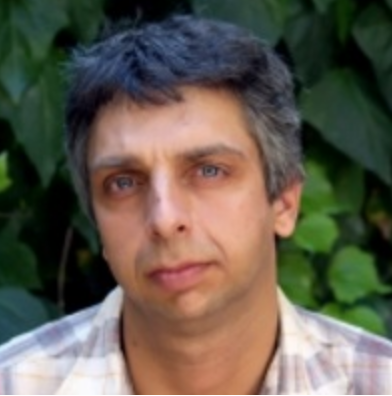 Stamatis Polenakis (Athens, 1970) has published seven volumes of poetry and the novel The fight with the angel. For his poetry collection The roses of Mercedes he has received the Greek national prize for poetry, 2017.

He studied Spanish Literature in Madrid and has lived in Spain and in Ireland. He is the author of the poetry collections The Hand of Time (Omvros, 2002), The Blue Horses of Franz Marc (Odos Panos, 2006), Notre Dame (Odos Panos, 2008), The Odessa Steps (Mikri Arktos, 2012), The glorious stone (Mikri Arktos, 2014). His poems have been published in Greek literary reviews and have been translated in English by Yannis Goumas and Richard Pierce. In 2009 Polenakis was awarded a scholarship at the Baltic Centre for Writers and Translators in Visby, Sweden, and in 2010 and 2011 participated in the International Poetry Translation Workshop, held respectively at Delphi and on the island of Paros, Greece.

Polenakis has written the monologue Emily Dickinson’s Last Dream, which was presented in 2007, as part of the Theater Readings (organized by ITI UNESCO), and in 2008, as part of the HSBC Greek Dramaturgy Festival. In December 2010, this play was broadcast by the Radio România Cultural in Romania and the program represented Romania at the Prix Italia Radio and Television International Festival, held in Turin in September 2011. Emily Dickinson’s Last Dream has been translated into English by Richard Pierce, in French by Myrto Gonticas, and in Romanian by Cezarina Udrescu. The English version was performed as a staged reading at the Hellenic American Union in Athens on May 17, 2012. His play Fish Soup was written in 2008 and it was presented as part of the Readings (Greek National Theatre) and has been translated in French by Jacqueline Razgonnikoff. His most recent plays are Berlin and A Distant, Unknown Country.

As a member of Citizen TALES Commons, he is looking forward to mingling with its dynamic community of poets, writers and translators.